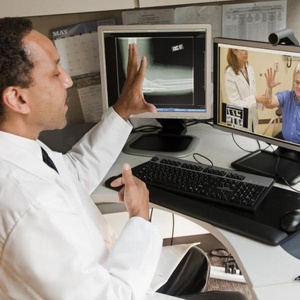 A History of Telemedicine in America

In 1925, inventor and publisher Hugo Gernsback imagined what health care might look like in the near future: doctors and patients communicating via screens, with the physician prodding at the patient with remote, robotic arms.

With the exception of those arms, Gernsback’s predictions aren’t far off from today’s reality.

From the development of the telephone to the radio to the internet, medicine and technology have always been intertwined for years.

All of these crucial developments have shaped the care received by patients today. And in light of the past few years, as telehealth became crucial to the global coronavirus pandemic response, Rex MD has compiled a list of 10 events and milestones––spanning the 19th century to present day––that contributed to the history and impact of telemedicine.

In 1879, an article in the peer-reviewed medical journal The Lancet featured a physician who asked a new mother to hold her child up to the phone so he could hear the child’s cough. As Sidney H. Aaronson recalls in his paper “The Lancet on the Telephone 1876–1975.” Upon hearing the baby cough, the doctor concluded that it was not the croup—a viral upper airway infection—as the mother had feared. The doctor was spared a trip out at midnight, and the family was able to rest easy. The article by an anonymous writer was one of the first references to communication technologies furthering health care remotely, Aaronson writes. Many doctors began to embrace the phone, noting its convenience and potential to reduce disease transmission by limiting in-person contact.

1906: Inventor publishes paper on the telecardiogram

Dutch physician Willem Einthoven is regarded as the father of modern electrocardiography for his development of an early electrocardiogram. The device captured the heartbeat by printing the shadow of a string galvanometer, which moved when a current from the heart passed through it. The string’s movement corresponded with the strength of the current, and accordingly, the heartbeat, as Einthoven explained in a 1906 paper that outlined how he used telephone wire to record heart signals from patients nowhere near his facility. His invention, at nearly 600 pounds and much bulkier than today’s ECG machines, was used for 50 years. In 1924, Einthoven received the Nobel Prize for his work.

Hugo Gernsback, who invented the first home radio set, was also the publisher of Science and Invention magazine. In the magazine’s February 1925 issue, he delved into radio’s potential for medical diagnostics. The issue’s cover—in addition to boasting “40 Non-technical Radio Articles”—depicted the use of an imaginary device called the “teledactyl.” Today’s modern telemedicine allows doctors to see and hear patients, but Gernsback’s futuristic teledactyl went one step further by allowing doctors to touch patients with remotely operated robot arms, as Smithsonian Magazine reported.

A 1950 paper published by the Radiological Society of North America’s monthly journal detailed the transmission of X-rays over telephone or radio wires between West Chester County Hospital and Philadelphia 24 miles away. The system had been in use since 1948, and the paper is considered one of the earliest mentions of telemedicine in medical literature. The paper’s writers, one of whom developed the technology, wrote of its potential to provide better care in rural communities: “One of the most difficult problems raised in the functioning of a good rural hospital is the successful operation of a clinical and X-ray laboratory. At present, the part-time attendance of an experienced radiologist from the nearest large urban center is secured, but this arrangement necessitates waste of much time in travel, sometimes over long distances.”

1950s: First use of hospital-based telemedicine

Montreal’s Jean-Talon Hospital also established a teleradiology system in the 1950s, according to a 1996 U.S. Institute of Medicine, now National Academy of Medicine, paper. At the University of Nebraska, doctors began using television to transmit information to medical students in 1948. This eventually scaled into a television link between the university and Norfolk State Hospital, over 100 miles away, whose uses included remote psychiatric diagnoses, speech therapy, and research seminars.

Space exploration necessitated an understanding of how outer space might affect the human body, creating new developments in telemedicine, as detailed in a 2020 NASA paper. Both American and Soviet space agencies conducted test flights with animals, whose condition they monitored from Earth. The creation of the Integrated Medical and Behavioral Laboratories and Measurement Systems (IMBLMS) was designed to improve these remote monitoring systems and establish the means for astronauts to tend to each other in case of a medical emergency. Though NASA’s ambitions for the program weren’t fully fulfilled because of later budget constraints, IMBLMS served as a launching point for the Space Technology Applied to Rural Papago Advanced Health Care program created in the 1970s, which established a mobile health unit to provide care to the Tohono O’odham, formerly Papago, tribe in southern Arizona.

Many studies have found that both in-person and virtual visits result in the same diagnoses. One 1998 study on teledermatology had both in-person and virtual examiners assess one patient and found that they arrived at the same diagnosis 80% of the time. Another study from the same year focused on emergency departments and concluded that there was no difference between patients in regular and telemedicine treatment when it came to factors like patient needs for additional care and positive interactions with doctors and nurses. Other papers examined diagnostic agreement between virtual and in-person care regarding child psychiatric care, skin cancer diagnoses, and the assessment of strabismus, more commonly known as crossed eyes.

In the late 1990s and early 2000s, medical literature found that teleradiology, the practice of having a radiologist review medical images without being in the same space as the patient, improved treatment for head injuries. One such article from the British Journal of Neurosurgery found that patients referred to care with the use of teleradiology faced fewer unnecessary transfers. And when transfers were necessary, the transfers were shorter and fewer adverse events occurred. A 1999 study suggested that viewing X-rays and other scans of trauma patients could lead to more care in transferring patients, like requesting more prior tests and implementing more precautions during the transfer itself.

One 2000 article asked in its title: “The Internet versus the telephone: What is telehealth anyway?” The authors, Gary R. VandenBos and Steven Williams, surveyed psychologists hoping to understand the prevalence and future of online health care. They found that only 2% had used the internet or other satellite technology. Still, they concluded they expected the internet would become a crucial component of telecare. They were right—in just a decade, telehealth became near ubiquitous, with programs existing nationally and internationally. This was bolstered by state legislation mandating insurance coverage for telemedicine. More than 10 states had enacted such a mandate by 2010, and many others have followed suit since, write Thomas S. Nesbitt and Jana Katz-Bell in the book “Understanding Telehealth.”

All the benefits of telehealth that doctors had noted years ago, particularly reduced physical contact and disease transmission, became a necessity during the COVID-19 pandemic. With in-person interaction severely limited, patients across the world turned to their screens for everything—including health care.

Telehealth usage appears to have peaked in April 2020 in the early days of the pandemic. Whether care is solely online or in a hybrid format, having online options allows for wider geographical access to care and reduced travel times for patients. Virtual mental health care became particularly common during the pandemic, with the rise of services like Talkspace and BetterHelp.

Thanks to steady progress in the 20th century and now lightning fast internet connections, telemedicine is here to stay. What Is a Concussion? Causes, Symptoms, & More

Concussions are a risk in car accidents and contact sports. While they aren’t usually fatal, they can result in life-altering side effects. Types of Sleep: Everything You Need To Know

There are two types of sleep (REM and non-REM) and four distinct sleep stages. Read on for everything about the anatomy of sleep. What Is Tendinitis? Everything You Need To Know

Tendinitis is a common issue for men as they get older, caused by inflammation in tendons. It can generally be resolved with rest.