Anatomy of the Penis: How An Erection Works

By The Rex MD Editorial Team

The penis is a unique and marvelous organ, capable of reproductive functions, urinary functions, and able to transform from flaccid to erect in a moment. Yet most guys have a poor understanding of penile anatomy, how erections work, and how all of these functions come together in one package. Here's how it works.

Externally, the male penis has several main parts: the glans (or the head) and the shaft, while the scrotum sits a little further below and is considered a separate structure. The scrotum contains the testes, the primary male sexual organs and the source of sperm production.

No surprises here. But what's going on INSIDE the penis? How is this appendage so versatile, and how does the penis get hard?

Parts of the Penis: Outside

Let's start with a little more detail on the exterior of the penis.

The penis head is known in the world of anatomy as the glans penis, or glans. The glans is conical in shape (some might say mushroom-shaped), and is formed by the expansion of an internal component called the corpus spongiosum (details below). It's the termination of the penis, contains the tip of the urethra, and is also highly sensitive, with thousands of nerve endings that contribute to pleasure for guys.

The prepuce is more commonly known as the foreskin for men, and the term actually applies to the female genitals, too (in that case, it's the "clitoral hood" that covers the clitoris).

For uncircumcised men, the foreskin is the double roll of excess skin and blood vessels that covers the glans to protect the head. It can be pulled back manually or during an erection to reveal the full glans. Many male infants are circumcised at birth – as many as 85% of men in the U.S. at one time – though the rate of circumcision has declined in the last half-century.

The shaft contains the urethra at its center, buried below a layer of skin, connective tissue, and the main erectile bodies of the penis, the corpus spongiosum and the corpora cavernosa (pluralized because there are two).

Guys have lots of questions about the penis shaft. If you're wondering about average penis size and whether your penis is normal, penis dimensions look something like the below, according to one large study published in 2014:

The base of the penis houses the root, which contains the only real muscles in the penis, the bulbospongiosus muscle and the ischiocavernosus muscle. These are partially involved in forcing blood into and out of the penis structure, helping keep blood flow in the penis during an erection, as well as helping to empty residual semen or urine from the urethra. Two ligaments help to support the whole structure, called the suspensory ligament and the fundiform ligament.

Finally the scrotum houses the testicles or testes, the epididymus, and the vas deferens. This is where sperm are created and housed until ejaculation or re-absorption. 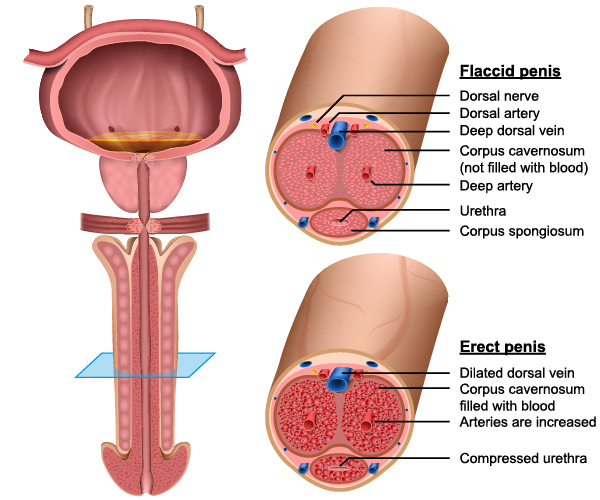 Parts of the Penis: Inside

A closer look at the inside of the penis gives us a much better understanding of what's happening during an erection.

The urethra is what you use every day in the bathroom and – as often as possible – in the bedroom. It's the tube that runs through the penis and releases both ejaculate and urine.

The urethra runs through the center of the penis shaft up into the abdomen where it connects to the bladder. But it's also connected to the ejaculatory ducts right below the bladder, which carry ejaculate (a mix of semen, prostatic fluid, fluids from the seminal glands and from the Cowper's gland) into the urethra for expulsion. The prostate, which is partly muscle tissue, surrounds the urethra and helps to put some velocity behind the ejaculate.

Is the penis a muscle? Not actually. The penis sometimes feels awfully muscular, but what' you're feeling is soft tissue filled with blood during an erection: the corpora cavernosa and the corpus spongiosum.

The corpus cavernosa are two tissues that traverse the shaft of the penis lengthwise on either side (see cross-sectional diagram below). They're separated by the septum of the penis, although not completely. In between and along the top of the shaft run two arteries and veins for the delivery and removal of blood (the dorsal arteries and veins), and an artery runs through the center of each corpus cavernosum as well (the deep dorsal arteries and deep dorsal veins).

The remainder of the erectile tissue can be found in the corpus spongiusum, which runs lengthwise along the bottom of the penis (see diagram). Like the corpora cavernosa, it fills with blood rapidly during the erection process, and it's through this tissue that the urethra runs. As a result, the urethra gets compressed slightly during an erection, though the spongiosum does not get quite as stiff as the cavernosa for this reason.

The testes are responsible for sex hormone production, like testosterone, as well as sperm production through a process called spermatogenesis. These are the male sex cells that ultimately fertilize the female egg.

The epididymides are tubes located on on the back side of the testes that connect the testes to the vas deferens, which are the ducts responsible for transporting sperm up to the urethra for ejaculation. Each epididymus is a tightly coiled tube about 20 feet in length in humans, yet still fits inside the scrotum! The epididymides are where the middle stages of sperm maturation take place – it's where they learn to swim(!) – and also the ability to fertilize an egg. Final maturation doesn't take place until the sperm are in the female reproductive tract.

Testicle is the term for the combined sperm production package: the testes plus epididymides.

Another pea-sized organ in the abdomen, the Cowper's Gland or bulbourethral gland, contributes the pre-ejaculate fluid that helps to lubricate the urethra before ejaculation. It's the "pre-cum" many guys are familiar with.

We hear so much about the prostate, especially as we age. It serves a variety of purposes, but it's also prone to issues like enlargement, infection, inflammation, and infection. Older men are at greater risk for these issues.

The prostate is a walnut-sized gland that produces another part of the ejaculate called prostatic fluid. Prostatic fluid is alkaline to help neutralize the acidic environment of the vaginal tract and to keep sperm viable.

How do erections work?

When it comes to how erections happen, it's all about blood flow. But it begins with nervous system, in one of a couple ways. It could be visual stimulation - there are certain things guys like to see, of course, and that can be enough to signal the nervous system that it's time for action. Alternatively, it could be a matter of physical stimulation. That's the case during intimacy, but can also be as simple as a brush from your blankets in the night (as with morning wood) or rubbing in your jeans the wrong (right?) way.

Either way, when the brain gets the proper signal, the arteries in the penis relax and dilate, letting more blood into the penis and filling the corpora cavernosa and the corpus spongiosum - very much like sponges.

At the same time, the veins in the penis become constricted, reducing how much blood can flow out of the penis, while muscles at the base of the penis constrict to keep blood in and a membrane surrounding the corpora cavernosa called the tunica albuginea help to trap blood in the penis.

Under increased pressure, the penis rises to an erection, much like a cylindrical animal balloon fills with air.

Afterwards, blood flow into the penis slows and the veins begin to dilate to allow blood back out of the penis at a normal rate.

How Does Viagra® Make an Erection?

Viagra® and the other popular ED medications like Cialis® and Levitra® all work through the same mechanism: inhibiting an enzyme called PDE5.

PDE5 is a natural part of the erection process that typically slows down and helps to reverse the dilation of arteries. By inhibiting PDE5 with an oral medication like the above, you're basically cutting the brakes on the erection.

These medications have been used by millions of men to successfully treat ED since they were approved in the late 90's and 00's, and now they're more accessible than eve thanks to telehealth services like Rex MD.